When I heard about Firefox OS for the first time I was really excited about this new project. And now, today, I have a real device in my hands which is based on Firefox OS. It’s a Geeksphone Peak. It is a developer preview, so it does not work 100% smooth at the moment. But it is still amazing what you can do with web technology.I had to start coding immediately, of course. I want to get used to this new, promising platform. And I want to improve my knowledge in web technologies, because I think this is the future of application development. The first step was a small “hello world” app. You can find it here: http://hello.webapp.hannay.de/hello.html. The next step was an app that uses a REST online API to display information about water levels of German waters. It’s name is “PegelFox”. This app only works in German currently, but I plan to translate it to English at least. You can find it here: http://pegelfox.webapp.hannay.de/. It is based on Mortar, which is Mozilla’s template suite for Firefox OS apps. I miss the consistent design in the apps for now. But there are many activities around Mortar and they plan many changes. So lets see, how it evolves.

I plan to improve PegelFox more and more, put it on GitHub and into the Mozilla Marketplace. Let’s see how much spare time I can afford for this project :-)

Here two screenshots of PegelFox in the Firefox OS simulator. 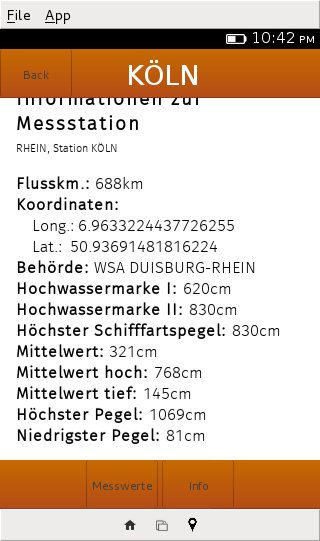 For development I use a text edior (gvim) and Firefox with the Firefox OS simulator plugin.