A few weeks ago I bought my first Netbook. I took some time coming to this decision, because I also still have my Sharp Zaurus SL-C1000, which is something like a MiniNetbook. It also runs Linux and there are many different distributions for it. But the performance is not good enough to run Firefox or other big standard applications. Lately I used my Zaurus only for time tracking and PIM, which not challenging enough for this nice device. I want something where I can run standard applications on and which is small enough to go travelling with it, even if the luggage is only a backpack. Of course the price should not be too high, because the risk that the device gets stolen is relatively high, when travelling.

So I started to look more intensive for these little Notebooks. My priorities have been the following:

Everything else like WLAN, USB, sound etc. is more or less standard. In the end there were 3 models left on my list.

I chose the Hercules, because it meets my requirements best. It is not known very well and I was not able to find it in any shop here around. So I had to order via Internet for ~250 €. And this is what you get for your money:

As you can see, there is no Bluetooth integrated. But the USB dongles are small, cheap and work out of the box. So I have my Bluetooth now.

The eCafe is available with Mandriva Linux or Windows XP. I chose the Linux version, of course.

I’m not familiar with Mandriva, but the pre installed system was easy to use from the beginning. The most important applications are installed already and the connection application is very easy to use. It was absolutely no problem to access my WLAN which is WPA2 secured. For the first few days I used Mandriva. Then I started to install Debian testing in parallel. My intention always was to use Debian at the end, because it’s my favourite distribution.

The installation of Debian testing (Squeeze) via net install went very well using the graphical installer. You can boot from an USB CD drive, easily. Luckily most of the Netbooks can more or less be handled like normal Notebooks. So there are no special tricks necessary to install another Linux distribution. The eCafe uses Grub as boot loader, which is standard for most of the distributions, anyway.

I only chose the “standard system” packages so that not so many applications get installed. I don’t want to use any of the “big” desktop environments on this small Netbook. Here is what I use:

The performance is quite good. I was surprised what can be done with such a small computer. Compared to my HP notebook it is not that much slower for the standard applications. It is more difficult to get used to the small screen. I even have installed Eclipse and did some Java development on the eCafe. Especially the screen size is setting the limits here. You have to maximize the windows you are interested in to be able to see enough of the context. From performance point of view, it is a little bit slow. But fast enough for some programming in the train etc. I was really surprised.

To give you an overview of the integrated hardware and the Linux kernel modules that are used, I have uploaded the output of lsmod and lspci.

The support for the integrated Intel 945GM graphics controller is very good, To use the framebuffer on the console I pass vga=788 to the Kernel. For X11 no special settings are required. The intel driver is selected automatically and switches to the correct resolution of 1024x600 pixels. I only had to modify the DPI settings, because the default was 136 DPI for me. This can be done by setting Xft.dpi: 96 in the ~/.Xresources file.

I did not try the external VGA connector yet, but I assume that it works fine with xrandr or grandr (very good GUI for xrandr).

The keys to adjust the brightness of the display (Fn + F5 and Fn + F6) are working out of the box. DPMS is also working fine.

When I ordered the eCafe, I was a little bit scared that the display might not be good enough to work outside. But after using it a few times on the balcony and on a bicycle trip I can say that it is good for outdoor usage. It is much better than the displays in my other Notebooks are/were. Ok, with very direct sunlight on the display it gets difficult, but that’s OK, I think.

The integrated touch pad works out of the box. The only problem is that you sometimes by accident touch the touch pad when you write a text. This is one drawback of such a small notebook.

From software point of view there is no problem with the keyboard. It works very well. But for your fingers, it is not that easy. The keys are smaller and in the beginning, it is hard to write a long text. But you get used to it.

The integrated WLAN has a RaLink RT2860 chip, which is not supported by the current Debian Kernel (2.6.26). But you can download the driver and compile it yourself. The only thing you have to do after unpacking the driver file is to edit the file os/linux/config.mk and set HAS_WPA_SUPPLICANT=y and HAS_NATIVE_WPA_SUPPLICANT_SUPPORT=y. Now you can call make. If you are not root, the kernel module can not be copied to the modules directory, so you get an error. Note that make install does not exist, so make does not just compile the module, but also tries to install it. If the installation fails for you, you can just copy the module to /lib/modules//kernel/drivers/net/wireless/ and call depmod -a as root afterwards.

WLAN works perfectly after the driver is installed.

The Ethernet chip is supported and works out of the box (r8169). I just had some performance problems from time to time. But I don’t know the reason yet. Most of the time I use WLAN.

Sound works with the snd_hda_intel driver. The built-in speakers are not very good, but better than nothing. The integrated microphone also works without manual configuration.

At least for SD cards it works.

The driver uvcvideo supports the web cam and you can easily use it with Skype or whatever you want.

Controlling the brightness of the internal screen via Fn+F5 and Fn+F6 works fine. DPMS to switch the screen off also works.

I had to load the acpi_cpufreq module manually and added it to the /etc/modules file. After that the frequency scaling works.

After adding the user to the group powerdev you can suspend the eCafe by using the Gnome power manager. It works very well.

Suspend to disk also works via the Gnome power manager. Nothing to do here. 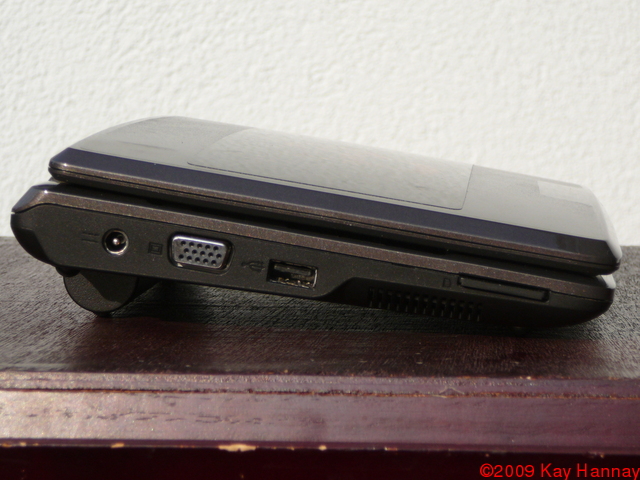 Left side with power connector, VGA, one USB port and the SD-card reader 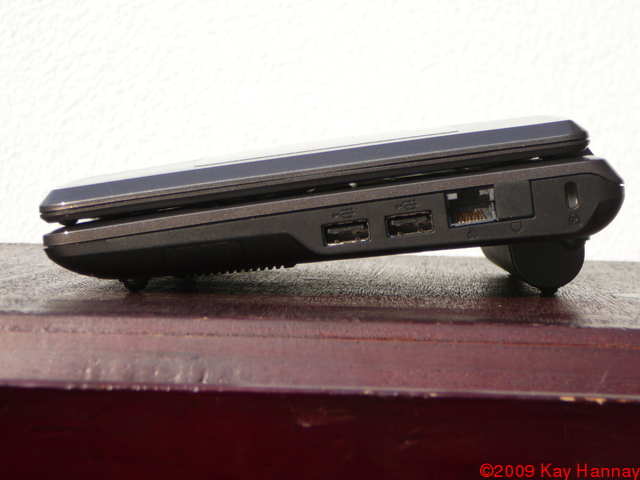 Right side with two USB connectors, the Ethernet port and the Kensington connector. 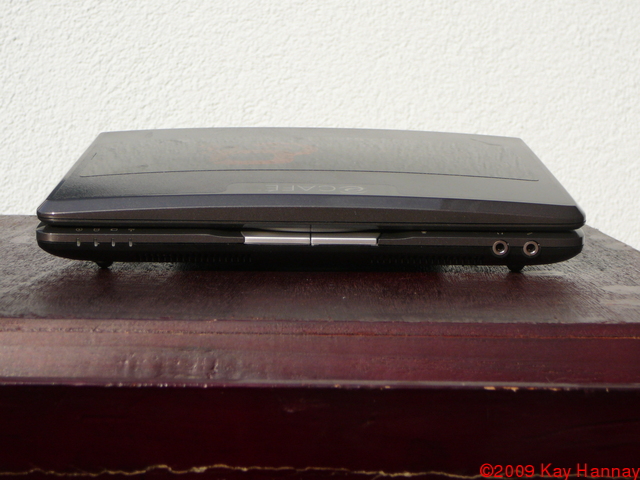 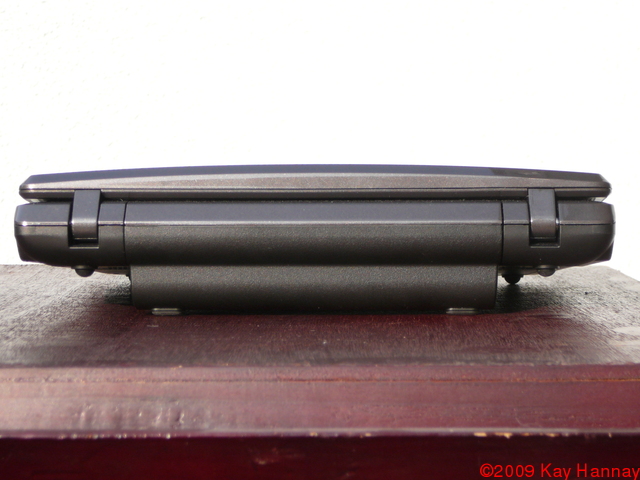 Back side with the battery 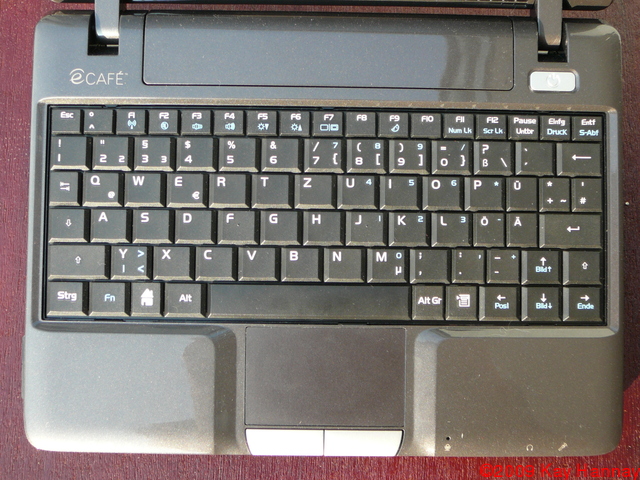 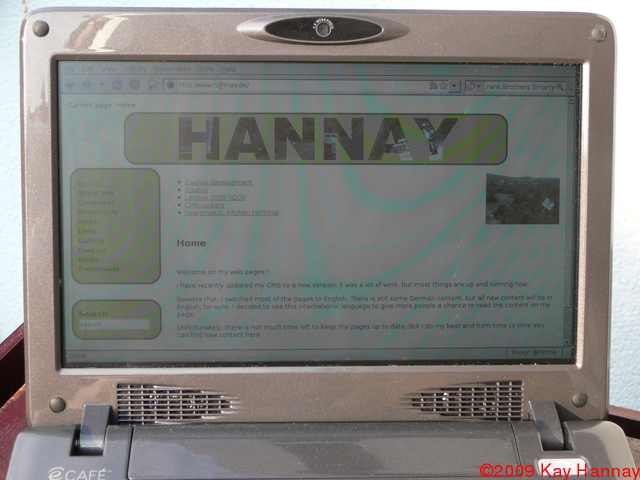 Display, webcam and speakers (outside with sun) 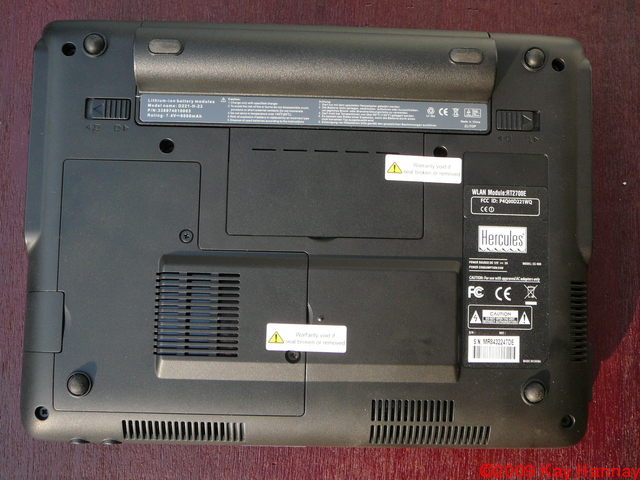 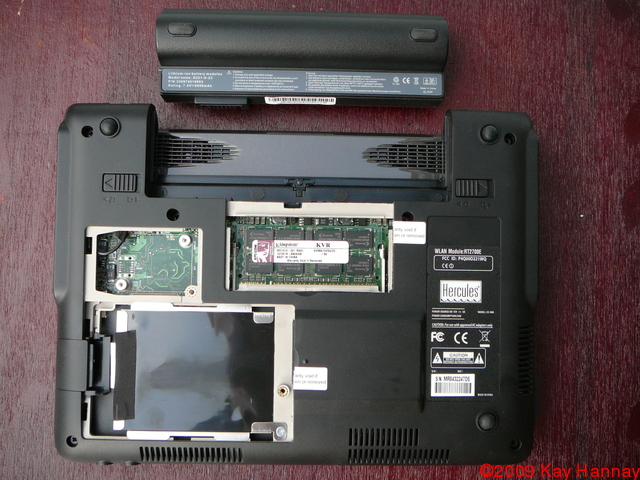